Manchester, NH (November 2014) – What is a “sabbath”?  The Webster’s Dictionary defines it as – a day of religious observance and abstinence from work, kept by Jews from Friday evening to Saturday evening, and by most Christians on Sunday.

That’s exactly what this was for me….  a day of drumming religion observed on Sunday.  LOL

Jim was invited to step-in (last minute) with a cover band for a song called “Mob Rules” by 70’s/80’s rockers, Black Sabbath.

Here’s a 120 sec video on the performance,  https://www.youtube.com/watch?v=0EUpxl2E12E

Four on the Floor 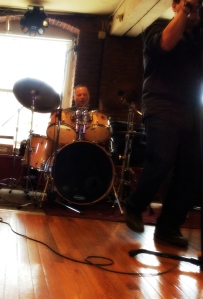 Manchester, NH  (May 2014) – At this point Jim gets limited time on stage drumming.  Today, he got to play Lenny Kravitz’s tune “Always On The Run” with some local pro’s at Milly’s Tavern in the millyard.

Check out part of the video:

This was put on from the company that Jim goes too for drum lessons. He’s still seeking more stage time with a band of his own.

The title to this post may sound stupid or down-right silly to some, but I’m living proof its true.

They say “you never know the person you married, till you aren’t anymore”.  Boy, someone called that one!  It started about 5-years ago when I was going through a nasty separation/divorce.  I was married for over 20+ years.

As an understatement, I was very frustrated with the court system, mounting attorneys fees (that was an expensive waste of time) and the personal attack of lies that my EX was generating to other adults, but more importantly, our teenage girls.  This craziness went on for 2-years.  My metal state of mind worn on me, so I came to grip with myself and said, “Self”, you need to seek a professional.  You need someone to talk / walk you through what’s happening or has happened. So that’s exactly what I did. I opened my benefits package and called the Employee Assistance Program.

I’ll tell you this,  it’s the best thing that could’ve happened to me.  About the same time as my appointment to talk it through, I took up an interest in drumming.  Not knowing a thing about drums, I went full-bore and bought a complete rock drum set with all the cool cymbals, stands, and sticks.  That same week, I signed up for local lessons from a drum professional.  If I’m going to learn this new skill and have people listen, than I want to be good at it.

This combination of lessons and drumming was completely supported by the professional therapist.  Matter-of-fact, she was so supportive that she told me that I couldn’t have pick a better instrument to learn based on the frustration you feel.  She back that statement up with, some men need to get their anger or aggression out and drumming is the perfect instrument to do just that.  I think she called it art therapy.  Doing some research looks like Los Angeles uses drum therapy on inmates to reduce aggression.  Ugh, who knew?

Moving the clock forward, drumming has been a saint for me.  With every weeks practice of getting slightly better; someday to play in a band for fun, is most calming thought ever.

Thank you Pearl, DW,  DP,  Tama, and Ludwig or whatever brand for saving my life!!  Without you, I’d still be banging my head instead of yours.  Rock On!  🙂

Music to My Ears

This is a posted dedicated to my drumming and the progress that I’ve had over  the last few years. HAHA…. they say you break your New Years Resolution  within a week.  Not this guy!

That’s right, I made a promise to myself back in the fall of 2013 to re-enlist in  drumming lessons again. That is, only after my car was paid off or sold.   (Lessons aren’t cheap you know. LOL)  Well, low and behold, I sold my car after months of chucking lobs of cash down on it.  I was 2+-years ahead on payments and hardly drove it.  I thought, why keep paying for a asset that losses value every mile you drive it or it just sitting there.

Anyways, I  got in touch with my old drum professional and schedule a day and time every week to get educated again. I never stop practicing, but I did it once every other week instead of weekly.

Drumming has been a god-scent to me over the years.  Yeeeeah, I’m a late bloomer and started to take lesson in my early 40’s. But, I give it my all when I’m behind the kit (drum set). Well drumming came about after reinventing or acting on my prioritizes after my divorce.   It truly got me focused and playing an instrument I always had interest in.

As you can image, it gets difficult, but not impossible to learn at an older age, but that didn’t stop me.  I started very slow on my new black (Pearl) 5 piece kit.  From the beginning, I had a burning desire to play songs and not just single, double, or triple drum rolls like they teach in middle school.  I wanted to play something that people knew.

Some of my favor cover song include 80’s metal bands.  Bands like Poison, Ratt, Alice and Chain, AC/DC, Metallica, and so many more.   I own multiple  3″ ring binders full of sheet music I’ve bought or had transcribed for me  over the years.  My books cover the gamut from slow tempo tunes, country (new country), dance, to hard rock.

After about 18-months, I posted a Craigslist “Wanted Ad” for band members and ended up in a band.  We all practiced at our homes and we got together once a month for a full practice.  We played out a few times to show a few cover tunes and get stage experience.  I wanted to play and practice more often then some of them wanted to do and the band broke up.

Moving forward, Here’s a list of drumming goal for 2014:

This years going to excellent for me and the music that I play.  I hope you keep a commitment to yourself and that New Years resolution you made!   🙂